Hi book friends, if you are looking for a fab YA thriller romance then THE REBIRTH OF HENRY WHITTLE on KINDLE is 99p for a limited time. An amazing dark romance with chills and thrills? YOU need this is your life. And you’d be making an indie author very happy 😃

Feel quite guilty that I haven’t blogged for a while, but this self promoting business is time consuming. However watch this space. 🌸 Or even better download my book so I can catch my breath. No refunds…couldn’t cope with the admin 🤣🤣🤣🤣 Just kidding, you’ll love it, RANDOM ATTACHMENT is WICKED, ACE, PENG, SICK, LEDGE

Enjoying a book is subjective. I know this from the many rejection letters I received from agents when I first started out.  Then when I had an agent, rejections from editors saying ‘I liked it but I didn’t love it’.

I am prepared that for every five-star review my novel receives, there might be twenty one-star reviews.  I can’t be more accurate because so far Random Attachment has only 3 reviews. In a way this feels worse, it’s like you’ve gone to the school disco and no one wants to dance with you. I feel rather rejected. It’s early days I tell myself.  Life is so busy that readers most likely won’t review my book which is disappointing when you are literally a struggling writer.

In between tweeting about my amazing, spectacular, potentially YA version of #FiftyShades meets #Psycho (I have to be this confident because doubt won’t sell copies) I’m reading.

Lisa Jewell – Then She Was Gone: Slow start but boy does it get a grip of you and twist you around.

C.L. Taylor – The Treatment. The well plotted adult thriller writer diversified into Young Adult. I’m such a big fan that perhaps my expectations were too high.  It simply did not take off.  The YA voice was lacking, the characters flat, the story predictable.  I think the biggest challenge of writing YA is that I’m a middle-aged woman who needs an authentic teenage voice. This is one of the reasons I’m going it alone.  With my first (unpublished) novel The Rebirth of Henry Whittle my agent felt the YA voice was too street and too sophisticated.  I don’t think she gave credit to the savvy young adults out there ruling the world. I also feel she found the slang and swear words unpalatable, as do I, but the protagonist’s voice is central to the success of the novel. I don’t say f**k but Mia does. And she wants to make love with Flynn, on a bed, against a wall, once, maybe more; she views intimacy as a natural response to finding someone attractive. Promiscuity is possibly an outdated verb. It’s these key issues that I compromised on first time around with my agent. My daughters advised against diluting the vocab and the darkness and they were right.  I’m not saying CL Taylor’s characters should be swearing and jumping each others bones but they should be 3D. I hate blandness; I want to love, hate, fear characters. I remember when I picked up 13 Reasons Why long before the hype and I couldn’t put it down; I felt sick to the pit of my stomach, not just for Hannah and Clay but her family, Jessica, Justin – that is a book that doesn’t come around often.

I’m new to writing, I’ve been working at it for about five years on and off; barely any time at all.  If I could write one totally, mind-blowing novel like 13 Reasons Why that would mean the world. Perhaps I’m incapable…I don’t know.

I am confident in my writing though; I don’t shake at the knees that my friends are reading stuff and nonsense.  I’m widely read in the YA/NA market and if I can make sales I think Random Attachment can hold its own out there.

I recently read The Unbecoming of Mara Dyer and other than a cool name and a great book cover I didn’t rate it. Random Attachment is all about the characters. Could the premise be better constructed? Yes, with the help of a professional editor or maybe by me in ten years when I know what I’m doing.  I’m winging it at the moment.  I guess I expect more of traditionally published novels because of the expertise and resources they have to bring a book together. I didn’t connect with Mara. The story seemed all over the place.

I daren’t think about the criticism coming my way.  Or perhaps readers are so pee’d off they won’t review it. I hope that’s not the case.

Right now I’m focusing on social media, getting my name out there, trying to sell my book.  The paperback is as low in price as I’m allowed, I’m only making 25p on each sale and 20% of that is going to charity @myelopathy.org and @YMCAWestLondon.  So reviews are key and for anyone that has purchased the paperback, passing it on would be great. If you liked it then please Instagram it, Twitter, Facebook, whatever you can do is greatly appreciated.  I’m relying on reviews and word of mouth. To date I’ve sold 43 copies, not exactly mind blowing so all support appreciated. I’m not too proud to accept help, go for it!

I think it could be addictive. Promise not to do it every day

Titles and straplines are funny things.  “Which are lies? Which is truth? You decide.”  This is a novel of repressed memories, of withheld facts but lies? I’m not even sure why the close-knit group were named ‘the liars’ by their family. I get that whenever tragedy strikes there is gossip and twisting of facts.  That those involved have their own perspective of events.  But if you’d asked me what the title hinted at, it would be children weaving a web of lies.  A novel challenging the reader to differentiate between lies and truth.

Saying that my strapline A Boy, A Girl, A killer is embarrassingly basic.  Regarding titles, I named RANDOM ATTACHMENT in a minute.  I don’t deliberate, if my first idea fits the brief then onward I go – writing is what I love…or my imagination is limited! The strapline was harder than writing the book; I failed the challenge miserably but I think it’s pretty clear what the story is about. 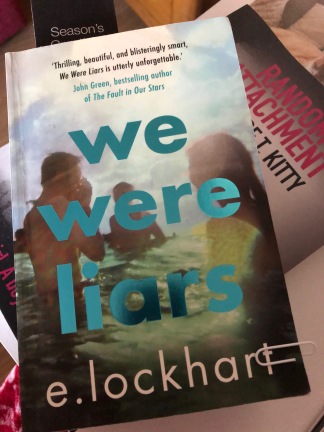 I enjoyed WE WERE LIARS. I read it over a few days. The story is beautifully and brilliantly told. I didn’t see the twist coming which is a credit to the author’s skill.  I was intrigued by what was being kept from Cady but I didn’t feel desperate to find out.  But that can be a good thing because you were with the characters whist they idled their holidays away.

I need to connect to characters. I liked Cady but I wasn’t gutted for her.  Yes she had headaches that immobilised her, yes pain was severely affecting her life but I knew by the end of the book her issues would be resolved.

Her love for Gat felt more like a crush – it didn’t burn within her.  It was more a response to a close friendship and an awareness of physical changes as they blossomed. I didn’t feel he was the love of her life. Had I, the conclusion would have hit me harder.

The fairytale concept I liked but they were too long and one too many.

I wasn’t totally convinced by Cady as a character.  THE REBIRTH OF HENRY WHITTLE (TRHW) has multiple pov’s.  RANDOM ATTACHMENT is a third person narrator; sometimes the young adult voice is lost within an adult narrator and I felt this true of WE WERE LIARS.  The writing is quality but there was no differentiation between the eleven year old cady and the fifteen year old.  I think that is common of YA books and it’s not always down to the writer.  My former agent loved the premise of TRHW and Phoenix’s voice. Yet throughout the editing process, bit by bit, she toned it down to the point it was lost.

Here’s what HotKeyBooks had to say about TRHW “This has a pretty dark premise at its core, I actually really liked the story. It was weird and twisty…but Phoenix’s voice ended up feeling a bit self-conscious.”

And so began the withdrawal of my agent who’d steered the book in the direction of ‘making Phoenix’s voice more palatable’ because it was in part angry and frustrated. It was at this point I decided to self publish.  I couldn’t go through another year of editing to find out it’s not what publishers want.  My years are too precious and I love my writing too much to lose control again.

WE WERE LIARS was hugely successful and I see why.  I’m glad I read it. I enjoyed it. I didn’t love it but I would highly recommend it. I’m not going to hold the publisher HotKeyBooks against e.lockhart.  Instead I’m giving WE WERE LIARS an 8.5 out of 10.  My 10/10 would be a book I miss once it’s finished, a book I wish I hadn’t read so I could read it again, a book like Laura McHugh’s THE WEIGHT OF BLOOD or Sarah Pinborough’s THE DEATH HOUSE and undoubtedly 13 REASONS WHY which I read in a night I was so engrossed and in despair for Hannah. These are books that have huge crossover appeal, anyone over 14 could love them.

Opinions are subjective; I would never severely criticise a writer because what I dislike another reader could love, so I simply don’t review.  I have read many more books both YA and ADULT that didn’t meet my blogging standards. So to all those authors on my pages I salute you for the fantastic books you’ve written. WE WERE LIARS would make a great Christmas pressie for the 11-15 age group. Thank you e.lockhart for a wonderful read.

Dark, Tense and Passionate: A review of The Rebirth of Henry Whittle by Gertrude T. Kitty

His name is the first lie he’ll tell you